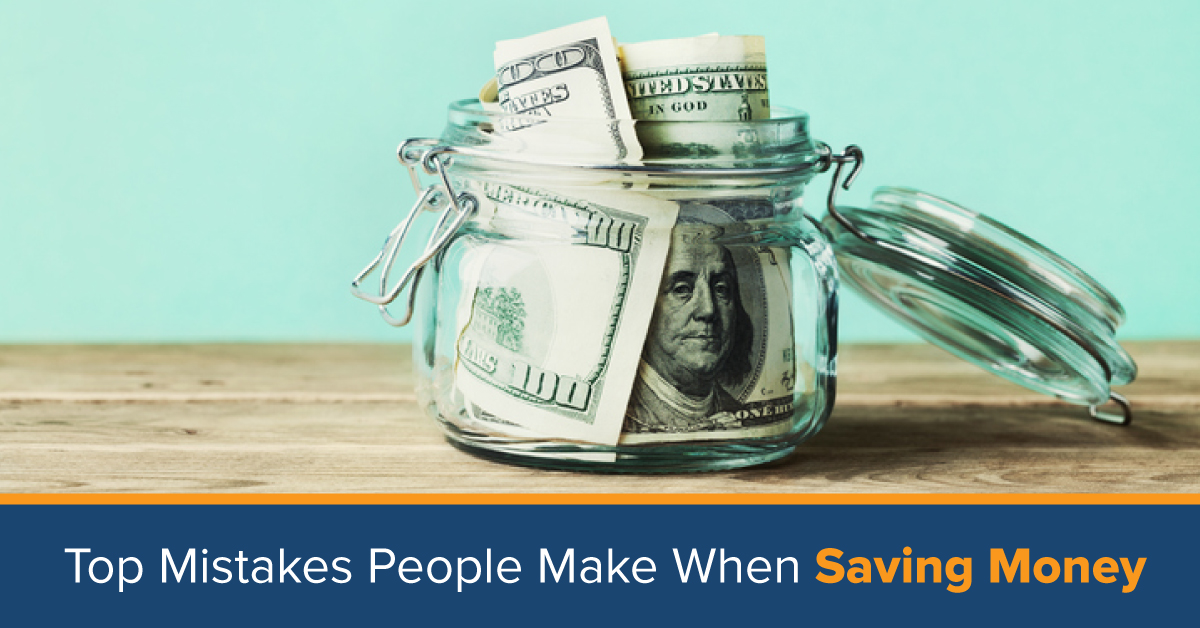 If you take a close look at the state of savings in the U.S., the picture isn’t a particularly pretty one. According to one poll, the majority of people would struggle to come up with $1,000 to cover an emergency expense.

Making the commitment to save more for emergencies and other life goals is the just the first step toward protecting your financial future. Here are some things to avoid when saving money. Not making these money-saving mistakes will also help you as you work get your finances on a more secure footing.

1: Focusing on Saving at the Expense of Everything Else

One common mistake people make when they start saving is, surprisingly, saving too much. While it’s a good idea to put a certain amount of your income aside for retirement or to have a cushion in case of a surprise expense or emergency, it can be more expensive in the long run to focus on saving and nothing else.

Focusing only on saving is particularly pricey if you have high-interest debts, such as credit card debt. You’ll end up paying more and earning less in the long run if you make the minimum payments on a credit card with an interest rate of 20 percent while saving as much as you can in an account that earns a relatively low interest rate.

It’s better to pay down your high-interest debt first, as quickly as you can, then focus your efforts on increasing your savings.

2: Not Prioritizing Your Saving

While you don’t want to ignore high-interest debt to focus on saving money, you also don’t want to prioritize some types of debt over setting money aside for the future. This is probably one of the biggest misunderstandings people have when trying to save money.

For example, federal student loans with low interest rates and mortgages are typically considered forms of “good” debt. Depending on the interest rate on your student loans or mortgage, it might make sense to put saving for retirement or beefing up an emergency fund first, before you focus on drastically reducing your debt.

You should prioritize saving over debt repayment if your employer matches your 401(k) or other retirement plan contributions and if the expected return on your plan is higher than the interest on your student loans or mortgage. That way, you’ll have more money set aside for the future, and that money will have more time to build interest and grow.

3: Buying Items Because They Are on Sale

Who doesn’t love a good sale? Very few people, it seems. But buying items on sale, promotion or clearance doesn’t necessarily help you save money. In fact, you are usually more likely to spend more when you shop the sales than when you don’t.

The only way you’d save money by purchasing a marked-down item is if you had initially intended to spend X amount but ended up spending Y amount, then put the remainder in savings. For example, say you had planned to buy a pair of shoes for $100, but they ended up being $75 when you went to the store. You deposit the $25 you didn’t spend on shoes in your savings account or invest it, instead of spending it on something else in the store.  But if you spend that $25 on other items, you aren’t saving money.

There’s a reason why people often say “you get what you pay for.” The cheapest option is usually precisely that — cheap and not likely to last for very long. For example:

5: Going on a Spending Fast

A quick Google search reveals countless news stories of people who went on spending fasts or shopping bans for months or years and ended up saving thousands of dollars or paying down massive amounts of debt.

But those stories don’t always show the full picture. While cutting out all unnecessary spending can help you boost an emergency fund or retirement account, it can also make you more likely to spend more when the fast or ban is finished.

It’s wise to cut back on spending, but don’t do it so much that you feel entirely deprived or as if your needs aren’t being met. If you are going to cut back, it’s better to do it gradually. For example, if you’re not in the habit of cooking, instead of saying “I won’t purchase prepared or takeaway food at all this month,” decide to make your lunch or dinner at home a few times per week.

Cutting back will help you build up better habits, such as making your own meals. Over time, you might find that you make food at home more and more often, so that getting take-out becomes something you don’t even miss.

Not having an emergency fund is a pretty big mistake to make when saving money. While you do want to put money into a retirement account, it’s also important to have money in a separate savings account, so you can get to it quickly if a surprise expense occurs or you lose your job and need money to cover your cost of living while you look for work.

Establishing an emergency fund can seem daunting, especially if you start from scratch. One option is to set small goals at first, then increase them as you set more aside:

Ultimately, you want to have between three and six months of expenses in your emergency fund.

You might earn a higher interest rate if you put your emergency savings into certificates of deposit or if you invest that money in stocks or mutual funds. But doing either can make that money difficult to get to, without paying a penalty, when you need it most.

To put your mind at ease, it’s usually best to have your emergency fund be liquid. That means keep it in a savings account. The savings account can be at the same bank as your checking account or at a different one. What matters the most is that you can access your cash quickly in an emergency.

The same is true if you keep your emergency savings in a box under your bed or a safe at your home. The temptation to spend it might just be too high. Plus, money kept at home in a box or safe doesn’t earn interest and has no protection. If there’s a fire at your home, your emergency fund can go up in flames.

9: Keeping All of Your Money in a Savings or Checking Account

Although keeping all of your money together can seem like the simplest way to save, it can create a few issues. One problem, mentioned above, is that it can make it easier to spend the money you’re meant to save.

Another potential problem is that you might not get the best return on investment or you might increase your risk for loss if you keep everything in the same account. It’s usually a good idea to keep the money you might need in an emergency in a savings account, then invest or save the rest in accounts that have higher interest rates or the potential for a higher rate of return.

10: Saving Without a Goal

Your money needs a task or a job to do, and it’s up to you to give it a function. Not having a goal for your savings makes it more difficult for you to put money aside. After all, if that money doesn’t have a clear purpose, you might wonder what’s the point in saving it?

Along with creating goals for savings, such as “retirement,” “vacation” or “down payment on a home,” create a timeline and a target amount. For example, if you’re saving for a down payment, how much do you want to set aside? When would you like to start looking for houses?

11: Forgetting to Save Each Month

Every time you get paid, you have the best of intentions. But you end up getting to the end of the month without setting any money aside. Instead of saving the money you have left over after you’ve paid your bills and purchased other items, commit to saving a certain percentage of your paycheck before you pay for other things.

One easy way to make sure you set money aside each pay period is to have the funds immediately transferred to the appropriate account right after you get paid. You’ll never see the amount you’ve dedicated to saving in your checking account, so you’ll never feel the urge to spend it.

12: Waiting for a Major Life Event to Start Saving

Another mistake people often make when saving money is procrastinating or telling themselves that they will start saving after they’ve reached a particular milestone. That milestone might be paying off a specific debt or earning a specific annual salary.

But the best time to start saving is now. Even if you can only afford to set aside a few dollars a month, it’s better to get in the habit of saving rather than wait. Plus, getting used to saving early on can help you learn to live on a certain amount of money, which can help you avoid lifestyle inflation as your savings increase.

Stocks, exchange-traded funds, mutual funds — there are many different types of financial products available. Some products are more opaque than others, which can put a few hurdles in the path of a person who’s hoping to save.

If you’re going to invest in anything, always read the fine print first. For example, before you invest in a mutual fund, you’ll be given a prospectus. The prospectus might seem long and contain a fair amount of technical or confusing language. But try to read through it. If you have any questions, you can ask a financial advisor for clarification.

Make sure you are 100 percent clear on the fees, terms and other requirements before you purchase or invest in any financial product.

You will not make money fast from a savings account. Be very wary of financial products that claim they can help you earn a sizable return in almost no time at all.

Usually, the things with the highest potential for return, such as peer to peer loans or cryptocurrency, such as BitCoin, also have the highest risk. For instance, BitCoin tends to rise and fall dramatically, often over the course of just a few days. While you could get lucky and make a fair amount of money from it, you could also stand to lose thousands of dollars if its value plummets.

There’s no reason to try to manage your money and savings entirely on your own, especially in this day and age, when there are many resources to help you. You can get assistance with creating a budget from a variety of apps or by working with a financial counselor, for example.

A fiduciary, a type of financial advisor who needs to make suggestions based on what’s in your best interests, can also help you choose where to save your money and how to invest.

Now you know what not to do when saving money. For many people, the first step toward saving is opening a savings account and setting money aside for an emergency or “rainy day.” If you live in Pennsylvania, learn more about how to open a savings account at Mid Penn Bank today.

Please be aware you are leaving Mid Penn Bank's web site. You are being redirected to a linked site (hereafter referred to as 'site') for your convenience. The content appearing on this site is third-party content. Mid Penn Bank is not responsible for providing or updating the information found on this site. This site is provided as an informational source only.

We advise you not to email confidential information such as account number(s) or your social security number.